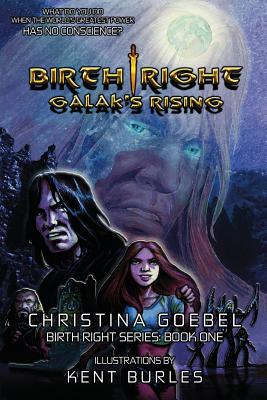 What do you do when the world's greatest power has no conscience?

Two, not of blood, but joined in blood,

may conquer only as a selfless act of love.

-from The Prophecy of the Dancers of Silence

The illustrated dystopian science fiction epic fantasy BIRTH RIGHT TRILOGY depicts the first battles of a brutal war between humans, cyborgs, robots, and genetically enhanced beings. In the first book, BIRTH RIGHT: GALAK'S RISING, you are introduced to the Valki and Galak.

At the onset of a technological war that could destroy their race and the technology that made them superior, the genetically enhanced Valki traveled more than a century into the future.

In this new civilization, Galak, a cruel cyborg obsessed with creating his own race of superior beings, induces the remaining human feudal and native tribes to war against one another. To limit the Valki population, births are restricted to one per woman, unless they are twins. Galak demands that Valki teen twins compete for a Birthright, the right to have children--or be sterilized.

The courage of two young Valki women to resist Galak's law pits princes, kings, and mighty warriors against a merciless and powerful foe.

To save humanity, the girls, named only 99 and 100, and their allies must resist an opponent who has the field and technological advantages. Only those willing to sacrifice everything can defeat their enemies.

The BIRTH RIGHT TRILOGY explores the ethical implications of technology with adventure, romance, humor, and terror.