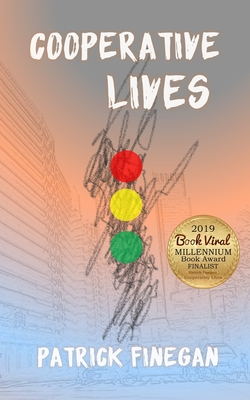 Patrick Finegan peels back the fa ade of a storied Manhattan residential complex in his award-winning novel, Cooperative Lives.

A landmarked midtown Manhattan address. Carnegie Hall and Central Park at your feet. Three hundred units. Thirty-two full-time employees. Five hundred neighbors. You've hit the big time. Joined the elite. But what do you know about them, the neighbors? Have you ever met them? Really engaged with them? Or do you gaze down in the elevator, the same way you do on the subway and the street?

Oh sure, you've heard a famous writer lives on the fourteenth floor, a retired US senator on the eighteenth. You've witnessed so many Broadway impresarios glide through the lobby you've lost count. But what about your real neighbors - the couple in 7H, for instance, or the family in 8B? Did you know they once harbored the most wanted fugitive in America?

No? It was in the papers for weeks; nearly tore the co-op apart. Even that famous writer on fourteen got involved. And all because an M7 bus side-swiped a resident-shareholder while turning down Seventh Avenue.

You're busy? Oh, I'm sorry. Just thought you should know something about the co-op's history. And buy more insurance, lots more; I've got a friend named Stanley.

It is perhaps unorthodox to declare a story which transpired 6-8 years ago in the country's largest metropolis historical fiction but labelling it otherwise would be a deception. The election of a bilious talk show host to the world's highest office, the NSA-sponsored surveillance, cataloging and storage of millions of Americans' phone logs and recordings, the petulant, self-imposed withdrawal of Great Britain from the EU, the global contagion of anti-immigrant nationalism - no pundit could have predicted these developments in 2013. And no one would have believed him.

I intended this book as a work of contemporary fiction. It described, I think accurately, the city and world I lived in. Just six years have elapsed since its completion, but I might as well have described ancient China. The world and New York City of 2013 no longer exist. I hereby present, for better or worse, the world's most contemporary historical novel.

Patrick Finegan is a native New Yorker who worked more than thirty years in law, corporate finance, management consulting and risk management. For the great majority of those years, he lived in the same residential co-op. This is his first work of fiction