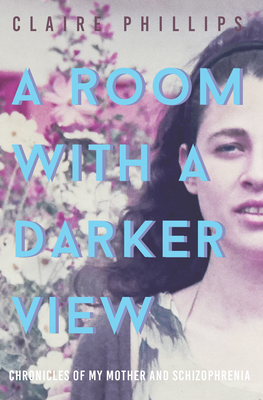 A Room with a Darker View

Chronicles of My Mother and Schizophrenia

A daughter breaks the family silence about her mother's schizophrenia, reframing hospitalizations, paranoia, illness, and caregiving through a feminist lens.

Claire Phillips' elegantly written and unflinching memoir about her mother, an Oxford-trained lawyer diagnosed in mid-life with paranoid schizophrenia, challenges current conceptions about mental illness, relapse and recovery, as well as difficulties caring for an aging parent with a chronic disease. Told in fragments, the work also becomes a startling reflection on the evolution of feminism as seen through mother-daughter relationships.

Only with her mother's final relapse at age 73 did the author begin to tell this story, first in Black Clock magazine, an essay for which she received a Pushcart nomination and notable mention in The Best American Essays 2015.

Claire Phillips is the author of the novella Black Market Babies and recipient of the American Academy of Poets, First Prize. Her writing has appeared in Black Clock magazine, Los Angeles Review of Books, Largehearted Boy, and MotherBoard-Vice, among other places. She was nominated for the Pushcart Prize and given a notable mention in The Best American Essays 2015. She teaches writing at CalArts, the Southern California Institute for Architecture (SCI-Arc), University of California, Irvine, and is Director of the Los Angeles Writers Reading Series at Glendale College. She holds a M.A. in Creative Writing from New York University, and a B.A. in English from San Francisco State University.
Loading...
or support indie stores by buying on