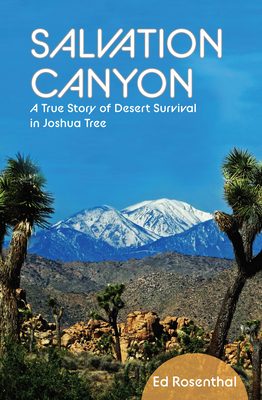 A True Story of Desert Survival in Joshua Tree

Ed Rosenthal was Jewish kid from the mean streets of Rockaway, Queens who became a real estate broker in Downtown Los Angeles. His passion is poetry, writing about the historic buildings he sells and advocates to preserve. He hates slumlords, is fed up with his buyers, but finally closes The Big Deal and saves a century's-old icon: Clifton's Cafeteria. It is fall of 2010 and he's ready to not to talk to anyone for a week. After the ribbon cutting he skips town and makes his way toward the Mojave to bathe at a natural spring and take his favorite hiking trip in Joshua Tree National Park. But his vacation soon turns into a nightmare. Over six grueling days without water, food, or hope, he discovers a well of perseverance in the snippets of his life that play over the deadly but inspiring landscape, in which he finds himself utterly and inexplicably lost. The God of Random Chance has, despite his best efforts his whole life, finally caught up to him. He describes his ordeal and its setting in intimate, vivid detail: surreal visions mix with wayfinding and intuitive wisdom in a poet's-eye view of the life-lessons and magic that the desert can hold.

Ed Rosenthal is a poet and real estate broker in Downtown Los Angeles (DTLA) who has been at the epicenter of a decades-long revitalization effort of the historic area. Combining issues as diverse as real estate deals, minority contractors and homelessness, his socially-oriented poetry has been published in venues from large to small to unusual. In 2002 the Wall Street Journal published a series of his rhyming couplets in which he admonished short-sighted developers. A 2003 LA Times feature covered Rosenthal's "Poetic Request for an Extension of Escrow," citing the poetry which helped foster DTLA redevelopment. Rosenthal is the only poet to be published in the magazine of the prestigious Urban Land Institute in Washington D.C., Urban Land. Rosenthal also performs his poetry publicly, including at Beyond Baroque, events with the LA Community Redevelopment Agency and in old Downtown theaters like The Orpheum. In 2013, he published his collection The Desert Hat (Moonrise Press) based on his near-death experience in the Mojave Desert in 2010. Most recently his poems have been published in various California journals and with the Sierra Club. He lives in Culver City, California with his wife, Nicole.
Loading...
or support indie stores by buying on