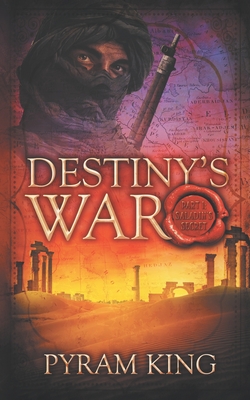 The world is at war. Deep in enemy territory, Marion discovers a secret that will tip the balance of power. Facing a mysterious enemy, time is not on his side. Will Marion make it out alive or perish protecting the secret?

The Great War erupts across the known world pitting empires against nations. The Middle Eastern desert becomes a battlefield as the Ottoman Empire battles against the pressing British Forces.

It's 1917. By the time he's eighteen, Marion is a reporter, a spy, and an archaeologist - but not necessarily in that order. After his mother died, he ran away from home to follow in the footsteps of Sir Richard Francis Burton, which he did both literally and figuratively.

Traveling with the Imperial Camel Corp deep into enemy territory, Marion discovers a history and a secret dating back centuries. The myths of Saladin, Sinan, Assassins, and Templars hide a truth of an ancient war.

Marion does not know who to trust when a mysterious new enemy seeks an artifact which may hold a secret that could tip the balance of power.

If you like Indiana Jones, the adventures of Lawrence of Arabia, and the mysteries of Dan Brown, then this series is for you.Scroll up and order your copy NOW