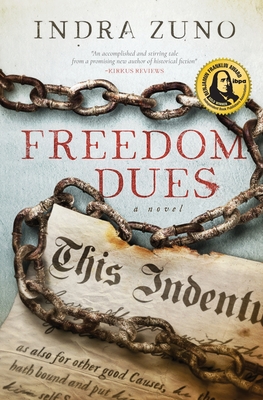 1729: Blair Eakins is a fifteen-year-old Ulster-Scot living in Ireland under the crushing weight of famine, poverty, and prejudice against his people. In search of a better future for himself and his beloved, he pays for passage to the American colonies the only way he can: he commits himself as an indentured servant for a term of four years, having no idea what he's in for. His rough ocean crossing is ony the beginning of a new life of hardships in Philadelphia. In Lodon, ten-year-old orphan pickpocket Mallie Ambrose is arrested for stealing a handkerchief. After experiencing the horror of Newgate prison, she is sentenced to Transportation; bound into indentured servitude and exiled to the American colonies. Once in Maryland, she is sold to a tyrannical tobacco planter for seven years. As Blair and Mallie each endure hellish conditions, their paths eventually cross when they are acquired by the same owner. After Blair steps in to defend Mallie from their cruel master, the two escape and head west, finding unlikely allies among the Delaware Indians. But as fugitive without rights, they live in constant fear of capture.Indra Zuno vividly portrays the terror and injustice of indentured servitude in pre-Revolutionary War America while championing the indomitable spirits of two strong survivors who struggle against monumental odds to find the freedom to love each other and control their own destiny.