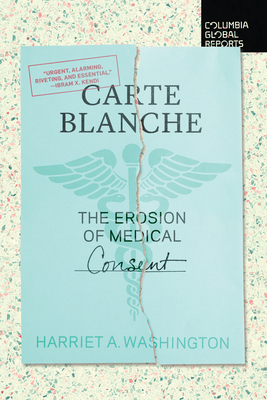 The Erosion of Medical Consent

"Urgent, alarming, riveting, and essential." --Ibram X. Kendi
Carte Blanche is the alarming tale of how the right of Americans to say "no" to risky medical research is being violated. Patients' right to give or withhold consent is supposed to be protected by law, but for decades medical research has been conducted on trauma victims--who are disproportionately people of color--without their consent or even their knowledge. Harriet A. Washington, the author of Medical Apartheid, is again exposing a large-scale violation of patient, civil, and human rights. She reveals that the abuse first began in the military: In 1990, the Department of Defense forced an experimental anthrax vaccine on ground troops headed for the Persian Gulf. After a 1996 loophole to federal law permitted research to be conducted even on private citizens, particularly trauma patients, the military has pressed ahead to impose nonconsensual testing of the dangerous and sometimes lethal blood substitute PolyHeme among civilians, quietly using it on more than 20,000 non-consenting victims. Since then, more than a dozen studies have used the 1996 loophole to give risky and potentially deadly drugs to patients without their knowledge, especially people of color, many of whom were already justifiably distrustful of racial bias in medicine. Carte Blanche is an expos of a U.S. medical-research system that has proven again and again that it cannot be trusted.