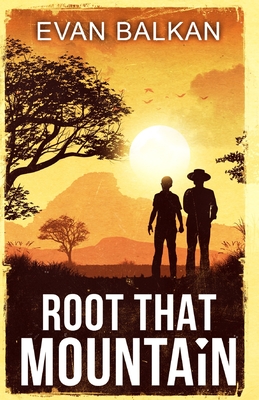 "Evan Balkan's writing is transportive. At its heart, Root That Mountain is a story about an everyman, or, rather, an every-son, Felix, who takes on a leading role, traveling to West Africa to retrieve the body of his slain father. Against the backdrop of a war torn Sierra Leone, Balkan's remarkable book stretches across continents and reads as if it was lifted directly from John le Carr . I couldn't put it down."

After Felix's father, a doctor volunteering in Sierra Leone, is murdered by Revolutionary United Front soldiers, he must go to Africa to retrieve his father's body. While there, Felix realizes how little he knew about his father...and Africa.

Among the war-torn city, greed, corruption, and the illicit "blood diamond" trade, Felix finds an unlikely friend in a Nigerien renegade soldier, Issa Manzo. As his guide, Issa shows Felix the underbelly as well as the beauty of Africa. Soon, Felix discovers that his investigation into this land his father loved so much carries dark secrets, unforgettable heartbreak, and surprising joy.