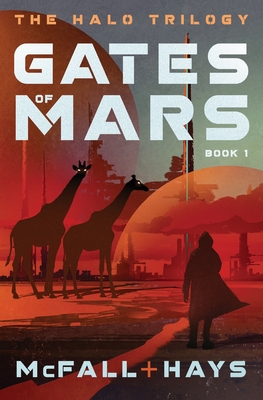 IN THE AGE OF SURVEILLANCE, HOW CAN A PERSON GO MISSING?

Set in 2187, Gates of Mars blends science-fiction with a classic, hard-boiled detective story. Crucial Larsen, 41, a veteran of the brutal Consolidation Wars, is working as a labor cop on Earth. The planet is a toxic dump and billions of people are miserable, but he doesn't care. Not his business. It took him a long time to get to the good life, or a good enough life. But then Essential, his beloved kid sister, wins the Mars labor lottery. After only a week on the red planet, she disappears. When Halo--the all-powerful artificial-intelligence overseeing Earth and Mars on behalf of the ruling Five Families--can't (or won't) locate his sister, Crucial races up-universe to find her. In the Choke, the frigid, airless expanse outside the luxury Martian domes, Crucial uncovers a deadly secret from Essential's past that threatens to shatter his apathetic existence ... and both planets.

The story is told from the perspective of Crucial Larsen, a battle-weary, caustic, gritty mess. In addition to looking for his kid sister, his trip up-universe will force him to see the one woman he can't ever seem to get over. She's a revered scientist who is genetically recreating, among other creatures, giraffes.