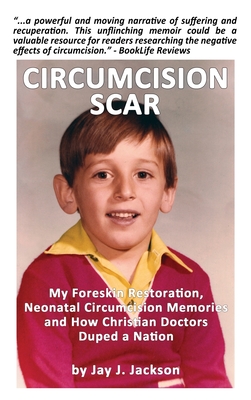 My Foreskin Restoration, Neonatal Circumcision Memories, and How Christian Doctors Duped a Nation

Did you know amputated foreskins are sold to cosmetic companies for $100,000, or that circumcision was alleged to cure brain tumors? It also has a history of megalomania - doctors believed it would cure black men of their predisposition to be rapists, and the more children they circumcised, the higher they'd ascend to god.

Most parents circumcise their sons without giving it a second thought. They have no clue what the risks are because doctors never offer "informed consent" - the legal obligation to educate patients on the risks and alleged benefits of any procedure so they understand what's being asked of them.

- Circumcision can result in amputation, disfigurement, or death.

- Your newborn son will be given an erection to facilitate the procedure.

- Circumcision has no genuine health benefits.

- America has one of the highest HIV rates in the world despite circumcision.

Jay J. Jackson's lifelong struggle with recurring nightmares led him to discover repressed memories of his neonatal circumcision. He details a compelling narrative about foreskin restoration, medical abuse and how Christian doctors surgically forced a nation into denial about the male anatomy.

After suffering an unrelated trauma at the age of 1, Jay experienced parallel memories that caused him to discern he'd been in two separate hospital settings as an infant, and his inability to reconcile these conflicting memories became the impetus behind his lifelong struggle.

As an adult, Jay sought treatment for erectile dysfunction only to be chased out of multiple doctor's offices that branded him immoral and perverse for suggesting circumcision is harmful. Abandoned by traditional medicine, Jay ultimately found a cosmetic surgeon willing to help and he endured 2 experimental surgeries to reverse the damage his circumcision caused.

In his 50's, Jay suddenly realized his recurring nightmares were repressed memories of his neonatal circumcision, which became the impetus for writing this book. He offers an unflinching glimpse into the debilitating mindset of circumcision related sexual trauma - the same debilitating mindset experienced by all victims of sexual violence. He details personal experiences, medical abuse, and the shocking history behind how circumcision became commonplace in America.

Circumcision Scar is an emotionally powerful story - after reading this book, never again can it be said that circumcision is harmless.

Consider reading this book if you're man enough to learn the truth about what's been done to you. Take a stand if you value protecting children over an arcane religious ritual. Educate yourself before needlessly circumcising your son.

2) How will your son learn he's been circumcised?

4) Attack of the Urologists

11) How I Remembered My Neonatal Circumcision

12) An Apatheist in a Dogmatic World

16) The Church of Medicine

17) Side Effects May Include