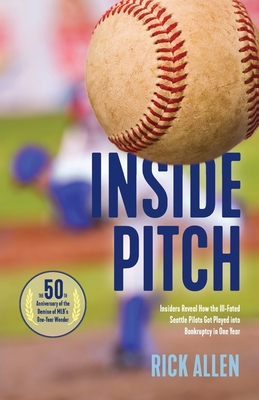 The story of Major League Baseball's shortest-lived team and its quirky characters--from the dugout to the front office.

The year 1969 ushered a new Major League Baseball team into Seattle: the Pilots. After many earlier years of successful minor league ball, the city had high hopes for a similar outcome. With plans for a new ballpark and a temperamental but hot-hitting young player named Lou Piniella in the spring training dugout, Seattle was finally getting their shot in the bigs. But the team lasted only one year before going broke and abruptly moving to Milwaukee to become the Brewers. How did that happen?

Jim Bouton's popular 1970 book, Ball Four, immortalized the Pilots' colorful cast of clubhouse characters. Inside Pitch goes beyond the gloves and cleats to tell the story of management misfits and administrative mistakes as the team was played into bankruptcy.

On the fiftieth anniversary of the team's 1970 bankruptcy and move to Milwaukee, Inside Pitch takes baseball fans on a behind-the-scenes look into the brief and quirky history of the Seattle Pilots from the unique perspective of two young team administrators. They share their recollections of the team's seemingly inevitable collapse and the Herculean efforts to save it by many in the organization. These same young men--who moved to Milwaukee with the team--also reveal some of the administrative hiccups and hilarities during the early days with the Brewers and their new owner, Bud Selig.