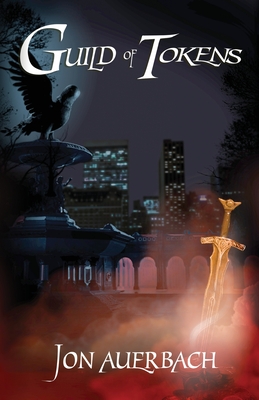 She wants to level up her humdrum existence. But her next quest could spell life or death.

Jen Jacobs's nights are spent traversing a strange city finding hidden objects, slaying dragons, and tangling with a host of fellow adventurers. And her days are spent counting down the seconds until she can return to the grind and continue racking up tokens and leveling up.

It's all real and happening right in New York City.

After a particularly harrowing quest pairs her up with Beatrice Taylor, a no-nonsense and ambitious mentor, Jen hopes she's on the path to becoming a big-time player. But as she dives deeper into the game's hidden agenda, she realizes Beatrice has her sights set on the Guild, the centuries-old organization that runs the Questing game. And the quests Jen loves are about to put both of them in grave danger.

Will Jen survive the game before powerful forces cut her real life short?
Guild of Tokens is a thrilling new twist on conventional urban fantasy. If you like determined heroines, gritty cityscapes, and vampire-free adventures, then you'll love Jon Auerbach's rollercoaster tale.