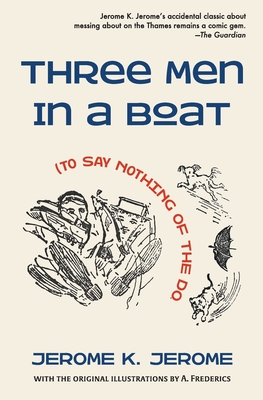 Three Men in a Boat, published in 1889, became an instant success and has never been out of print. In its first twenty years alone, the book sold over a million copies worldwide. It has been adapted to films, TV, and radio shows, stage plays, and a musical, and influenced subsequent writers such as P. G. Wodehouse, James Thurber, and Nick Hornby. It ranks among The Guardian's top one hundred best English novels of all time.
Jerome's light comic prose overtook what was intended as a series of magazine articles about the scenery and history of the Thames and became instead a humorous travelogue of a two-week boating holiday amongst three friends and the narrator's dog, Montmorency. The narrator muses on the significance of passing landmarks and villages such as Hampton Court Palace, Hampton Church, Magna Carta Island, and Monkey Island, while relating the hilarious mishaps of their adventure along with observations on everything from the unreliability of weather forecasts to the difficulties of learning to play the Scottish bagpipes.
Includes the original publication illustrations by A. Frederics.