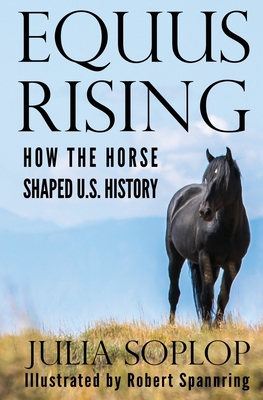 How the Horse Shaped U.S. History

Weapon. Legend. Energy source. Shaper of cultures. Center of controversy. Throughout U.S. history, the horse has served as one of the most powerful influences on the country's development. Beginning fifty-five million years ago with the evolution of the horse across the Great Plains, this story charts its extinction in North America, followed by its reintroduction to the continent by the Spanish. The eventual acquisition of Spanish horses by the native peoples of the plains had profound consequences for the continent's future: it resulted in the explosion of wild horses across the West and unleashed some of the most talented and brutal mounted warriors in the world, the Comanche, who staved off European-American development of much of the plains for nearly two centuries. From there, the story tracks the horse's incredible contributions-through warring and racing and hauling, through companionship and servitude and strength-across the broad arc of the country's next three hundred years. Soplop employs the horse as a narrative thread not only to bind seemingly disparate events, but also to allow for the inclusion of figures often written out of traditional histories: women and minorities. Through a modern, unconventional lens, she skillfully weaves together science, policy, literature, and history to trace the fascinating story of how one animal shaped the nation. Captivating pen and ink illustrations by Montana artist Robert Spannring, interspersed with Soplop's stunning photography, add further depth and visual interest.