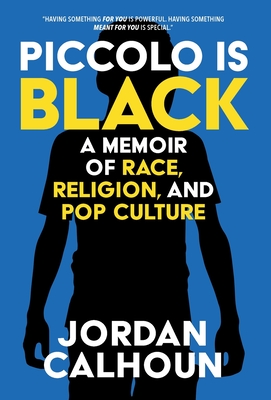 A Memoir of Race, Religion, and Pop Culture

Like most Black kids who grew up without diverse representation, Jordan Calhoun learned the skill of assigning race to fictional characters. Piccolo, Panthro, Demona, Ursula...he could recognize a Black character when he saw one. He lived in an all-Black city, went to an all-Black school, and could identify characters whose struggles informed his understanding of the Black experience in America.

Piccolo Is Black: A Memoir of Race, Religion, and Pop Culture chronicles Calhoun's journey from his childhood in Detroit, Michigan as a Seventh-day Adventist to being transferred to private, predominantly white, deeply religious, Seventh-day Adventist schools. He tells his story through the lens of the pop culture he loved and the common adaptations he made while navigating his religious, non-religious, and racial identities.

Calhoun reminds us that entertainment has value in forming our identities, and that we have something to gain by looking back at our childhood entertainment and pop culture experiences. Part homage to the characters he identified with and loved, part celebration of the pop culture-television, movies, music, video games-that influenced his childhood, Piccolo Is Black: A Memoir of Race, Religion, and Pop Culture is an honest, thought-provoking, and often hilarious coming-of-age memoir that celebrates Black identity in America.