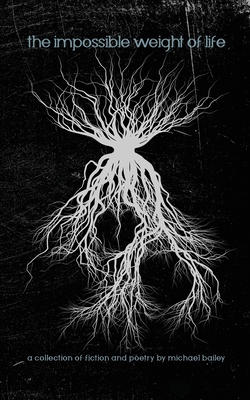 The Impossible Weight of Life

Written Backwards presents The Impossible Weight of Life, a painfully autobiographical collection of speculative fiction and poetry by Michael Bailey, author of previous collections such as Scales and Petals, Inkblots and Blood Spots, and Oversight. This time around, after an imbalanced world temporarily destroyed his vestibular system and flipped life upside-down (thanks to an extended bout of a strange condition called Bilateral Loss of Labyrinthine Function ), literally burned to the ground during California wildfires, then became threatened after rising from the ashes by acts of school violence, a flood, further fire evacuations, prolonged power outages, multiple uprootings, social injustice, political unrest, and finally a global pandemic, he decided it's time to bend the boundaries of the written word once more, in case, you know, the world rolls itself off the giant scale that balances life and death to end things once and for all.

This collection contains Bram Stoker Award-nominated short stories such as "I Will Be the Reflection Until the End" and "Time Is a Face on the Water," but also never-before-published mind-benders created during his "highly-medicated" state of recovery, including a story about memory loss called "Fragments of Br_an," (composed on a typewriter that no longer exists, now ash), "Emergence of the Colorless," a statement about the beginning of the end of prejudice, and the far future "Oll Korrect," in which artificial intelligence is used to explore humankind. As for poetry, there are favorites such as "Loosed Earth" and "Shades of Red," but many new poems to help with balance, including "Hurt People Hurt People," "Night Rainbows," and "Paper Earth."

13 stories. 13 poems. Time to crack the spine once more and see what kind of darkness and truths seep out...