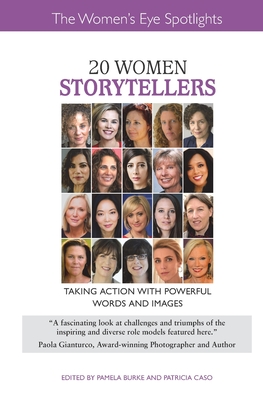 As a follow-up to our 20 Women Changemakers book, we want to share our interviews with a wide range of fascinating documentarians, photographers, journal-ists, broadcasters and impacters.

In this book we spotlight 20 Women Storytellers who inspire and motivate us. They are each driven by their passion to make a difference with their words and photographs. What is most exciting about these storytellers is that they come in all forms; we think you will enjoy their unique stories.

The pictures, the words and the images from 20 of the best. You can feel the inspiration here. This is great reading and worth every minute of your time. –Steve Friedman Award-winning Producer of the TODAY Show

The women featured are all skilled storytellers who have made a difference in our world. The result is revealing and powerful. It’s a great read. –Nancy Glass, Emmy-winning Executive Producer, Glass Entertainment Group

What can top a great story? Hearing these women tell their stories behind the stories. They pursue them with clear-headed drive, honesty, and compassion. –Sheila Sitomer Award-winning Producer Professor of the Practice, Boston University

As a father who grew up with, and listening to, four daughters. I urge you, sir, to explore the fascinating world these women inhabit and, more graciously, are willing to share with you. –Richard B. Stolley Founding Editor of People

These storytellers lead by listening and watching before they capture the story in print or with their cameras or both. They enhance our understanding of the world with their superb vision. –Bonnie Strauss Award-winning Television Correspondent and Documentary Filmmaker

It is no accident that so many of the stories here — of women and men and children — likely would not have been told without these media-makers’ interest and bravery in telling them. –Jane Hall Associate Professor, School of Communication, American University, Washington, D.C.

20 Women Storytellers is one-stop shopping for women spotlighting the truth while sharing their talent of the journalist’s pen, the photographer’s eye or the documentarian’s lens. –Samantha Harris, Emmy-winning TV Host and Author of Your Healthiest Healthy

A fascinating look at the challenges and triumphs of telling stories from the inspiring, diverse role models who are featured here. –Paula Gianturco Award-winning Documentary Photographer, Author and featured in 20 Women Changemakers.

Pamela Burke has been a member of the broadcasting industry and print media for more than 30 years as a television executive, bureau chief, producer, and reporter. She’s been an executive and/or producer of programming for NBC, LIFETIME, USA Network, USA TODAY-The TV Show, King World–CBS, A&E and DISCOVERY Planet Green.

She has created or produced several female-oriented programs including Attitudes, Working Mother, and The Working Women’s Survival Hour. As the founder of The Women’s Eye website, radio show and podcasts, she is dedicated to shining the light on people around the globe who are making a difference and changing the world in a positive way and telling their stories.

Patricia Caso, was a successful television executive producer and producer for 15 years. She then freelanced and did volunteer work for several nonprofits while raising two young men with her husband, Laurence Caso. Having always enjoyed working with people who make an impact, Pat took the opportunity to combine her producing experience with her regard for impacters to write and interview for The Women’s Eye in 2012. In 2017, Pat coedited 20 Women Changemakers: Taking Action Around the World with Pamela Burke.