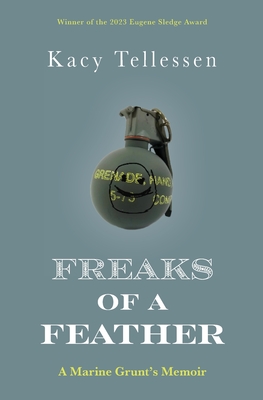 Freaks of a Feather

Kacy Tellessen is a grunt. After completing high school in rural Washington, he enlisted in the Marine Corps and began the hero's journey he imagined might parallel those epic tales he'd consumed throughout adolescence. But what Tellessen lived through--from boot camp to the battlefield and home again--had little in common with Homer's tales or Hollywood's depictions.

In his memoir, Tellessen offers a truer account of life as an infantryman: the complicated, conflicting, adrenaline-pumping, and traumatic experience of war. Though much of our country's fighting and dying is done by infantry members, few accounts detail the grunt experience with as much clarity and vulnerability as Freaks of a Feather.

Praise for Freaks of a Feather:

"Powerful prose, honest and humble. Only a Marine could write this. I'd be proud to have Kacy in my gun-team. Semper Fi."

--Johnnie Clark, author of the bestselling military classic Guns Up

"As introspective as he is entertaining, Tellessen uses a captivating blend of muscular and minimalistic prose to give us an uncomfortably honest look at where courage and nature diverge. Freaks of a Feather immediately separates itself from the litany of exploitative military accounts by avoiding political grandstanding or vicarious violence in favor of a remarkably intimate and often heart-pounding narrative. Despite this being his debut, Tellessen is able to use the deft touch of a seasoned writer to relay his story in a way that feels universal and yet wholly personal. This book will stay at the front of my mind and my shelf for years to come."

"Kacy Tellessen joined the Marines and went to war because he read The Iliad in high school. A writer of great heart and mind, Tellessen, in rich, crisp prose, provides both gripping war stories and the deep insights of a person who knows that literature helps us to live."

"Tellessen's memoir opens at the cyclic rate and never lets up. Freaks of a Feather is a book that you'll stick in your cargo pocket and never leave more than one arm's distance until you've read it cover-to-cover."