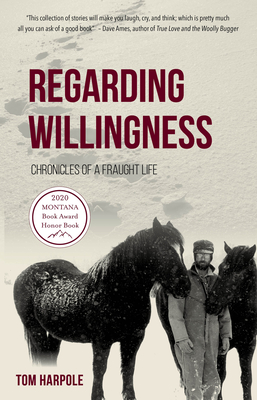 Chronicles of a Fraught Life

"(These) stories should be required reading." -Montana Book
Award Committee

Tom "Harp" Harpole was a horse logger working from remote
mountain camps and living in wall tents until an accident suggested a change of
lifestyle. He took to his other avocation - writing, and studied abroad in
Ireland. He began publishing stories in periodicals such as Smithsonian Air
& Space, Sports Illustrated, Crocodil, Montana Quarterly, Whitefish Review,
and more. In 1986 his story "The Last of Butch" (Faber & Faber, London) was
selected as The Best Short Story in the British Isles. His work has been
short-listed for the National Magazine Award twice, and translated into six
languages. He has been a guest reader on NPR more than a dozen times. Harpole
writes in a voice that uses his natural wit and humor to shed light on a
life of stories that bring readers to the edge of danger. "Tom Harpole is what
you might call a thinking man's Evel Knievel," - Aaron Parrett, author of Montana: Then & Now

Certain magazines that assigned Harp feature articles knew early
on that he would try anything that involved physical/emotional risks. He
regarded himself as a Survivor's
Euphoria aficionado. His
willingness and perspective on dalliances with danger range from an N.F.L.
record, to horse logging, to skydiving with Russian cosmonauts, to getting a
black bear stoned, to his compassion as a volunteer EMT in rural Montana, to
protesting Gorbachev in 1990, to driving ice roads above the Arctic circle, and
more. This book is a collection of sixteen of his most popular stories.