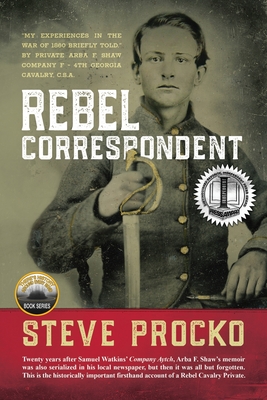 REBEL CORRESPONDENT is the true story of a young man who joined the Confederate army days after his eighteenth birthday and served bravely until the war ended. Wounded twice, he emerged a changed person. But he wasn't just a returning veteran; he was also a writer.

At the beginning of the 20th century, Arba F. Shaw was a fifty-seven-year-old farmer. On a chilly December day in 1901, he put pen to paper to write his memories of being a Rebel private in the 4th Georgia Cavalry (Avery), CSA. He completed writing his account in February 1902. His local newspaper, the Walker County Messenger, in Lafayette, Georgia, published his account in a series of over 50 articles from 1901 to 1903.

Then it was all but forgotten. Until now.