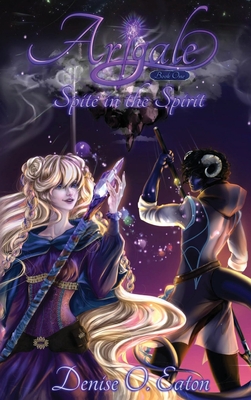 Spite in the Spirit

Judith and Chit are called to the lonely tower outside their city with little explanation. The one who summoned them is an old Elven wizard named Maleth, who will send them on a quest to lower their floating city of Arigale to where it once resided. Maleth is intrigued by Judith's strange form of necromantic magic, yet he is also certain of the anxious young man training to be a spearman and scholar.

Judith, a bubbly yet mysterious young woman, is eager to accept. Chit remains withdrawn and cautious, a remnant of being raised by the Order that presides over their land. Soon, both discover their meeting with the wizard carried dire consequences. Can they accomplish what has been asked of them and save Arigale by exploring the land below, no matter the lengths they must go to?

Denise O. Eaton grew up in a small town in southern Missouri. From a young age, she chose fantasy literature as a means to broaden her horizons within her rural community. Following this passion and wishing to give back to others, she went on to earn a degree in Creative Writing from Webster University in December 2014. The Arigale series is her first foray into publishing, and she has been working on it since 2019. When she isn't writing, she enjoys meeting with her Dungeons and Dragons group, watching fantasy and anime shows, practicing tarot, or planning her next cosplay costume.

While Judith and Chit are the main focus, many of the people they encounter on their journey will be instrumental in achieving their goals. Expect a multiple point-of-view story to unfold, where every character gets a chance to shine. Over the series, around twenty different characters will have a story to tell, all unraveling a web of intrigue as the series progresses. If you would like to know more about these characters and updates on the series in general, please check out www.arigalefantasy.com for all your needs. There are also side stories there you can read for free, and if you subscribe to the newsletter, then you will receive the first three chapters as a free preview for this book as well

This is a dark, epic fantasy series intended for teen and adult audiences. While Arigale has its light moments and a sense of triumph over impossible odds, many troubles also plague the character throughout. I feel it is only fair to warn you ahead of time that many themes and descriptions may come up involving things such as abuse (verbal and physical), alcohol, amnesia, anger, anxiety, blood/gore, bullying, cults, death/murder/suicide, depression, guilt, loss of a loved one, manipulation, misogynistic language, racism, genocide, terminal illness, trauma, PTSD, and violence.