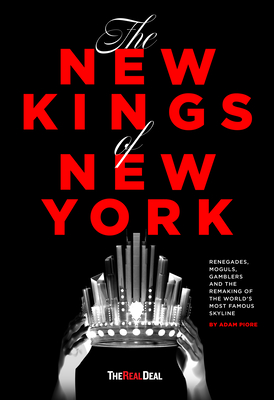 The New Kings of New York

The blood sport that is New York real estate is rife with billion-dollar feuds. There's a story behind every eye-popping apartment sale and audacious new development in New York City, and many of those stories involve the uber-wealthy behaving badly.


THE NEW KINGS OF NEW YORK: Renegades, Moguls, Gamblers and the Remaking of the World's Most Famous Skyline charts the extraordinary transformation of America's greatest city from a near-bankrupt urban combat zone into the land of Billionaires' Row and Hudson Yards--a luxury playground for the global 1 percent--and provides an inside look at the bombastic personalities behind the biggest real estate deals of this century. The first two decades of the 21st century were a giddy, hyperbolic era of dizzying highs and deep, dark lows. The headlines told the story: the world's biggest (and most disastrous) real estate transaction, the largest private development in U.S. history, the largest condo conversion in the history of the world, a commercial real estate nuclear winter, a $200 million penthouse sale, the world's most expensive office skyscraper, the tallest condo ever built. And then there was the pandemic of 2020: 95 percent of Manhattan's office space sat empty, retail stores were boarded up, and restaurants went belly-up. Yet somehow, New York, and its world-famous real estate market, rose again. Written by award-winning journalist Adam Piore and brought to you by the country's most authoritative real estate publication, The Real Deal, THE NEW KINGS OF NEW YORK offers a behind-the-scenes picture of what it's like to operate at the highest levels of the industry, and what it took to pull off skyline-transforming deals. Featuring never-before-reported accounts from the larger-than-life characters at the top of the real estate food chain, it's a tale of chutzpah, greed and city-defining vision.