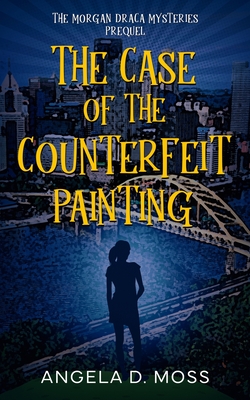 The Case of the Counterfeit Painting

She overheard a thief unveiling the heist of a lifetime, but is she clever enough to thwart a master criminal?

Twelve-year-old Morgan Draca loves the adventure of traveling; new sights and new cultures await She expects nothing less (or more) during her trip to Pittsburgh - until she overhears an art thief planning to replace a famous painting with a forgery Now it's up to her, in a race against time...

But with every move she makes, it feels like the world is against her. Her mother urges her to leave the sleuthing to the authorities, but Morgan fears she doesn't yet have enough information to stop the heist. Her bratty little brother insists on going to every museum - except those that will help her. Going after the crook on her own is too dangerous. And yet... she can't let any of this stand in her way. She needs the perfect plan - and her brother's cooperation.

Will Morgan's mother actually stop her from trying to find the painting? Will her brother remain between her and the answer? With such limited clues, can Morgan find the painting before it is too late?

Perfect for lovers of Nancy Drew, Enola Holmes, and Harley James, this engaging middle-grade mystery will take its readers on a tour through the city of Pittsburgh as our heroine attempts to follow her conscience and stop the thief. To do so, Morgan must also navigate through the challenges faced by every person her age: additional independence, responsibilities, and a need to assert her own thoughts and concerns.