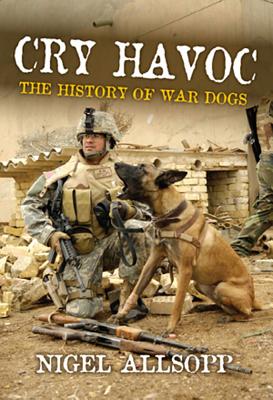 The History of War Dogs

Cry Havoc is a fascinating insight into the history of dogs in the military and the current day employment of them. From Babylonian mastiff-type war dogs with spiked collars to modern, kitted-out military dogs highly trained to detect explosives, dogs have long been a soldier's best friend. Nigel Allsopp, a highly experienced dog handler in both military and civilian police arenas, details how the incredible abilities of dogs are indispensable in military, para-military and police operations. Country by country, he details how dogs were used and trained in the past and present for patrolling, guarding, search and rescue, parachuting and, perhaps most importantly in today's political climate, detection of explosives. Allsopp's ability to not only write this information with real passion and expertise, but also to gain permission to print highly sensitive materials from nearly 50 nations, makes this the most authoritative and comprehensive book available on the subject. Cry Havoc galvanises the notion that, despite technological advances in warfare, dogs will continue to be one of the most useful tools support of every nation's security interests. The future will continue to hear the call Cry Havoc - And let loose the dogs of war!

Nigel Allsopp born in the United Kingdom started his Military Career as a Military Working Dog Handler in the Royal New Zealand Air Force Police in 1980. Within his 15 years service he rose to the rank of DOGMASTER responsible for all aspects of Canine Operations and training within the New Zealand Defence Force (NZDF). During his service he was a Military Working Dog Handler, a specialist Narcotic detection dog handler and an Explosive detection handler at various times. He became the first Military Dog trainer to qualify as a NZ Civilian Police dog trainer and supervisor. Nigel has trained numerous Government Agencies such as Customs, Police, Corrective Service and Federal Aviation Security in the use of specialist dogs. Nigel has also trained and supplied specialist detection dogs and Military Working Dogs to South East Asian Countries on behalf of formal government requests whilst in the NZDF.
or support indie stores by buying on
Copyright © 2020 American Booksellers Association