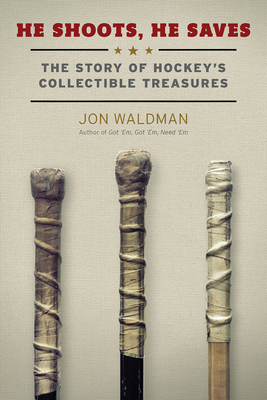 He Shoots, He Saves (Paperback)

The Story of Hockey's Collectible Treasures

Explore hockey's history through its unique and most desirable memorabilia

Whether it's a ticket stub from a game that father and son saw together, an autographed photograph from a hero, or a puck that went up and over the boards, hockey memorabilia is a record of our beloved sport's history. He Shoots, He Saves looks at hockey's collectibles from hockey cards to commemorative beer cans to postage stamps. The book features artifacts from all 30 NHL teams, the greatest players of all-time, the WHA, the international game including the Summit Series, and the women's game. Hockey greats such as Martin Brodeur, Frank Mahovlich, Ted Lindsay, and Sidney Crosby recall their own days collecting and offer their perspectives on memorabilia.

Winnipeg's Jon Waldman is a veteran of more than a decade writing for newspapers, magazines and online publications. A Ryerson University journalism graduate, Jon's work has been featured in The Hockey News, the Winnipeg Free Press, the Winnipeg Sun, the Toronto Sun, Beckett Hockey, Winnipeg Men Magazine, and a host of other media. Jon is a three-time published author with ECW Press, with his latest title, He Shoots He Saves, hitting store shelves in February 2015. Jon's previous books include SLAM! Wrestling: Shocking Stories from the Squared Circle and Got'em, Got'em, Need'em. When he isn't writing, Jon is a marketing and communications professional and works with numerous companies on their content strategies. In his spare time, Jon enjoys relaxing with his family, walking his dachshund, biking and stand-up paddle boarding.
or
Not Currently Available for Direct Purchase
Copyright © 2020 American Booksellers Association