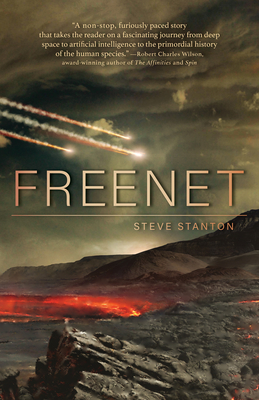 "A non-stop, furiously paced story." -- Robert Charles Wilson, award-winning author A nuanced story about artificial intelligence and digital immortality, Freenet plunges readers into the far future, when humans have closed distances in time and space through wormhole tunnels between interplanetary colonies. Consciousness has been digitized and cybersouls uploaded to a near-omniscient data matrix in a world where information is currency and the truth belongs to whoever has the greatest bandwidth. When Simara Ying crash-lands on the desert planet Bali, she finds herself trapped in a cave-dwelling culture with no social network for support. Her rescuer, Zen Valda, is yanked into a new universe of complications he can scarcely grasp and into an infinite network of data he never knew existed. When brash V-net anchorman Roni Hendrik starts investigating how Simara became the subject of an interplanetary manhunt, he finds a dangerous emergence in the network that threatens all human life. Freenet is an exciting new novel about the power of information, as well as the strength of love, in a post-digital age.

Steve Stanton is the author of the Canadian sci-fi trilogy The Bloodlight Chronicles: Reconciliation (2010), Retribution (2011), and Redemption (2012). Working from his riverside retreat in Central Ontario near the village of Washago, Steve has published science fiction stories in 16 countries in a dozen languages, including translations into Greek, Hebrew, Spanish, French, Hungarian, Italian, Finnish, Czech, and Romanian, and he served for three years as president of Canada's national association of science fiction authors.
Loading...
or
Not Currently Available for Direct Purchase