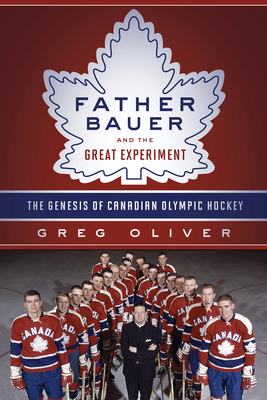 Father Bauer and the Great Experiment

The Genesis of Canadian Olympic Hockey

A pioneering and beloved Canadian legend comes to life Father David Bauer changed lives -- at the rink, in the classroom, and at the pulpit. Bauer's dream created the first truly national Canadian hockey team. In 1963, that unique group represented Canada abroad and were committed to both country and to Father Bauer. Whether shepherding the hockey program at St. Michael's College in Toronto or the men's national team out of the University of British Columbia, Bauer was both spiritual leader and trailblazer. Through exhaustive research and countless interviews, author Greg Oliver explores a Canadian icon, the teams that he put on the ice, and the rocky, almost unfathomable years of the 1970s when Canada didn't play international hockey. Finally, for the first time ever, the whole story of Father Bauer's critical importance to Canada's game is told in the rich detail it deserves, and a beloved icon is celebrated for his contributions to our nation's sporting history.

A writer, editor, and stay-at-home dad, Greg Oliver has written extensively about hockey and professional wrestling. Recent books include Blue Lines, Goal Lines, & Bottom Lines; Don't Call Me Goon; The Goaltenders' Union; Written in Blue & White; and Duck with the Puck. A member of the Society for International Hockey Research, Greg lives in Toronto, Ontario, with his wife and son. Learn more at OliverBooks.ca. Jim Gregory is a vice-president with the NHL and was inducted into the Hockey Hall of Fame in 2007.
Loading...
or
Not Currently Available for Direct Purchase