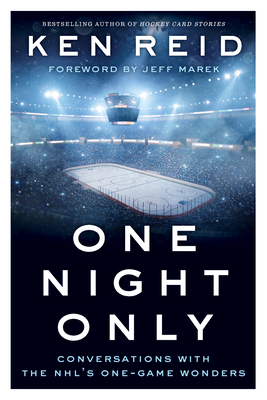 Conversations with the Nhl's One-Game Wonders

Get to know the men who fulfilled their childhood dream From the beer league to the minor league, hockey players from coast to coast often say they'd give anything to play just one game in the NHL. One Night Only brings you the stories of 39 men who lived the dream -- only to see it fade away almost as quickly as it arrived. Ken Reid talks to players who had one game, and one game only, in the National Hockey League -- including the most famous single-gamer of them all: the coach himself, Don Cherry. Was it a dream come true or was it heartbreak? What did they learn from their hockey journey and how does it define them today? From the satisfied to the bitter, Ken Reid unearths the stories from hockey's equivalent to one-hit wonders in the follow-up to his bestselling Hockey Card Stories.

Ken Reid co-anchors the weeknight prime-time edition of Sportsnet Central alongside Evanka Osmak. He is also a co-host of Prime Time Sports with Bob McCown on Sportsnet 590 The FAN. He lives in Toronto with his wife, Ash, and his two boys, Jacoby and Langdon. He still dreams of playing just a single shift in the NHL, but that ain't gonna happen. Jeff Marek hosts Sportsnet's Thursday Night Hockey and co-hosts Hockey Central Saturday. He is also co-host of the Marek vs. Wyshynski podcast with Greg Wyshynski.
Loading...
or support indie stores by buying on