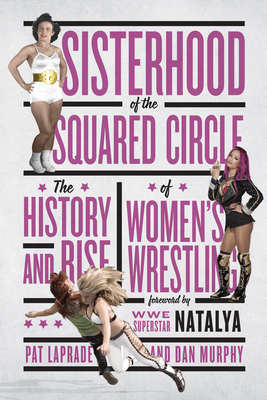 Sisterhood of the Squared Circle

The History and Rise of Women's Wrestling

A behind-the-scenes look at over a century of female wrestling, with profiles and photos , documenting the rise of women's wrestling from sideshow to WWE main event

"Sisterhood of the Squared Circle is absolutely a must read for most fans . . ." Wrestle Book Review

From the carnival circuit of the late 1800s to today's main events, this book offers a look at the business of women's wrestling with its backstage politics, real-life grudges, and incredible personalities. With more than one hundred profiles, you'll learn about the careers of many well-known trailblazers and stars of today, including Mildred Burke, the Fabulous Moolah, Mae Young, Penny Banner, Wendi Richter, Trish Stratus, Chyna, Lita, Charlotte, Sasha Banks, and Bayley.

With rare photographs and an exploration of women's wrestling worldwide -- including chapters on Japan, Mexico, England, and Australia -- Sisterhood of the Squared Circle is a priceless contribution to the history of professional wrestling.

Pat Laprade has been involved in pro wrestling for 15 years and has contributed to many women's wrestling promotions, including SHIMMER and Femmes Fatales. He co-wrote Wrestling Observer's 2013 book of the year Mad Dogs, Midgets and Screw Jobs as well as a biography of Maurice "Mad Dog" Vachon. He lives in Montreal, Quebec. Dan Murphy has been a writer for Pro Wrestling Illustrated since 1997 and has overseen PWI's annual female 50 ranking since its inception in 2008. He lives in Buffalo and has written four books on the history of his native western New York. Trained in the legendary Hart Dungeon, Natalya is a former WWE Women's Champion. She lives in Tampa, Florida.
Loading...
or
Not Currently Available for Direct Purchase