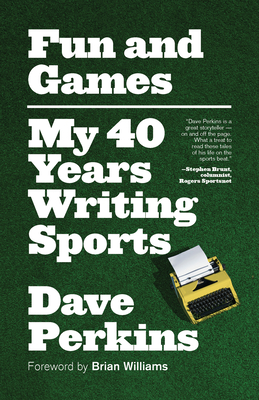 Find out what it's like to have "the best job in town" Dave Perkins was once told by a bluntly helpful university admissions officer: "You don't have the looks for TV or the voice for radio. You should go into print." Which he did, first at the Globe and Mail, and then for 36 well-travelled years at the Toronto Star. In Fun and Games, Perkins recounts hysterical, revealing, and sometimes embarrassing personal stories from almost every sport and many major championships. After 40 years of encountering a myriad of athletes, fans, team managers, and owners, Perkins offers unique observations on the Blue Jays and Raptors, 58 major championships' worth of golf, 10 Olympic Games, football, hockey, boxing, horse racing, and more. Learn why Tiger Woods asked Perkins if he was nuts, why he detected Forrest Gump in the 1996 Atlanta Olympics, and why Super Bowl week is the worst week of the year. Perkins exposes the mistakes he made in both thought and word -- once, when intending to type "the shot ran down the goalie's leg," he used an "i" instead of an "o" -- and to this day, he has never found a sacred cow that didn't deserve a barbecue.

Dave Perkins wrote about sports and the people who played them for 40 years. He lives in Toronto and shows up on Bob McCown's national radio show when the host needs to be straightened out. Brian Williams is an iconic sportscaster, known for his work on CBC, CTV, and TSN, and is an Officer of the Order of Canada.
Loading...
or
Not Currently Available for Direct Purchase