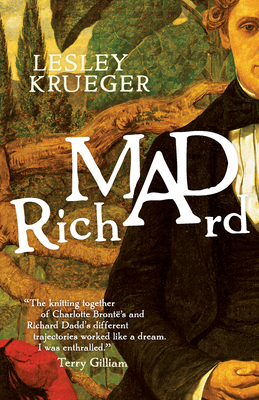 A riveting story of talent and the price it exacts, set in a richly imagined Victorian England Called the most promising artist of his generation, handsome, modest, and affectionate, Richard Dadd rubbed shoulders with the great luminaries of the Victorian Age. He grew up along the Medway with Charles Dickens and studied at the Royal Academy Schools under the brilliant and eccentric J.M.W. Turner. Based on Dadd's tragic true story, Mad Richard follows the young artist as he develops his craft, contemplates the nature of art and fame -- as he watches Dickens navigate those tricky waters -- and ultimately finds himself imprisoned in Bedlam for murder, committed as criminally insane. In 1853, Charlotte Bront -- about to publish her third novel, suffering from unrequited love, and herself wrestling with questions about art and artists, class, obsession and romance -- visits Richard at Bedlam and finds an unexpected kinship in his feverish mind and his haunting work. Masterfully slipping through time and memory, Mad Richard maps the artistic temperaments of Charlotte and Richard, weaving their divergent lives together with their shared fears and follies, dreams, and crushing illusions.

Lesley Krueger is a novelist and screenwriter. Richard Dadd's first cousin-in-law five times removed (if she has the genealogy right), Lesley drew on family information unknown to biographers in writing Mad Richard. The author of six books, she lives with her husband in Toronto where she's an avid member of a women's hockey league and a writer-mentor at the Canadian Film Centre. Find her online at LesleyKrueger.com.

1. Why do you think the author has paired the stories of Richard Dadd and Charlotte Brontë together in this novel?

2. Both Richard Dadd and Charlotte Brontë are artists. How are they similar? How are they different? Why? How are other artists, like Charles Dickens, portrayed in the book?

3. Richard thinks that his father “has spent his life trying to take possession of [him]” (310). Richard and Charlotte, and to a degree, Dickens, all struggle with controlling fathers. How do their experiences compare? Do these experiences influence their creative work? How?

4. Richard thinks of the artist as a “divided soul” (5). What do you think of his concept of duality? How is it expressed in the novel?

5. In the Victorian Era, many young men, especially gentleman artists, did a “Grand Tour,” travelling around Europe and far-off countries to visit sites with historical and artistic significance. How do you think this influenced those who travelled? How do you think it affected the art of the time? How do you see this represented in the novel?

6. Charlotte is troubled by how she thinks her writing will affect her married life. Why do you think this presents such a conflict for her?

7. Richard’s painting in Bedlam blurs the lines between art and reality, insofar as many of his figures look like people he knows. Similarly, Charlotte sometimes sees bits of herself in her novels, particularly in Jane Eyre and Villette. Even Dickens uses his experiences to shape his stories, and Mrs. Gaskell describes her novels as being “nothing but me” (201). What do you think of this hazy boundary between art and life? How are the two distinguished? What dangers lie in their becoming indistinguishable?

8. Early on, Richard says to Frith that “the past bleeds into the present . . . What we’ve been taught as children always [animates] what we do now” (24). How does this come into play for Richard through the course of the novel? How are other characters influenced by their early experiences? Do we ever see the opposite—“the future [bleeding] into the present” (24)—in this novel, as Frith quips? How is time played with in the story?

9. How might our being in the 21st century influence our reading of this Victorian-set novel? How does it affect our interpretation of its characters and plot?

10. Fame is controversial in the novel. Richard wants it, and is jealous of Dickens for having it. Charlotte has it, and, while lauded by society, feels isolated from her friends because of it. How significant do you think fame is in motivating and/or inspiring these characters? Is it beneficial to them?

11. The social causes driving both Mr. and Mrs. Gaskell’s work run counter to the artistic preferences of both Richard and Charlotte. The latter says that she doesn’t “write to a moral” (293), faintly echoing Richard’s earlier thought as he says, “I’m not sure art serves a purpose exactly, or that it ought” (157). What do you think of these approaches to writing and art? Should art be held to serve a social or moral cause, or is it only a matter of personal expression and beauty? Should it answer questions, or raise them?