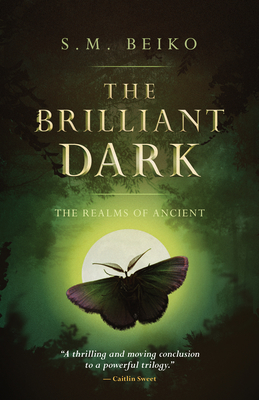 The Realms of Ancient, Book 3

Marked by Darklings and Death alike, Saskia is a mechanically minded Mundane, raised by Barton and Phae on daring stories about Roan Harken. But the world Roan left behind is in turmoil. The Darklings now hang in the sky as a threatening black moon, and with the order-maintaining Elemental Task Guard looking to get rid of all Denizens before they rebel, Saskia's only option is to go into the Brilliant Dark and bring Roan and Eli back.

But nothing is ever that simple.

The Brilliant Dark is the final, thrilling chapter in this series about gods, monsters, and the people who must decide if they're willing to pay the ultimate price to protect the family they found . . . in a world that may not be worthy of saving.

S.M. Beiko is an eclectic writer and artist based in Winnipeg, Manitoba. She also works as a freelance editor, illustrator, and graphic designer. Her first novel, The Lake and the Library, was nominated for the Manitoba Book Award for Best First Book as well as the 2014 Aurora Award. The first novel in this series, Scion of the Fox, won the 2018 Copper Cylinder Award.
Loading...
or
Not Currently Available for Direct Purchase