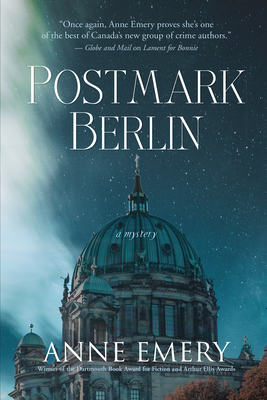 From two-time winner of the Arthur Ellis Award comes a new mystery that will keep readers guessing along with Collins and Burke. From Halifax, Nova Scotia all the way to Berlin, Germany, Father Brennan Burke searches for answers in the murder of a parishioner and finds that she was a woman with many secrets in her past.

Father Brennan Burke is coming off a rough stint in Belfast and he's been trying to obliterate those memories with drink ever since. His troubles intensify when the body of one of his parishioners washes up on the beach in Halifax. Meika Keller came to Canada after escaping through the Berlin Wall. Now a Canadian military officer is charged with her murder. Defence lawyer Monty Collins argues that her death was suicide. That's the last thing Father Burke wants to hear. Guilty of neglecting his duties as a priest when Meika needed him most, Brennan feels compelled to uncover whatever prompted her cry for help and led to her death.

He suspects that the answer lies overseas. But nothing could have prepared him for the events that unfold when he flies to Germany to investigate the case. In the midst of all this, Brennan and Monty must deal with conflicts between the two of them, which arose out of their time in Belfast and have yet to be resolved.

This multi-award-winning series is centred around two main characters who have been described as endearingly flawed: Monty Collins, a criminal defence lawyer who has seen and heard it all, and Father Brennan Burke, a worldly, hard-drinking Irish-born priest. The priest and the lawyer solve mysteries together, but sometimes find themselves at cross-purposes, with secrets they cannot share: secrets of the confessional, and matters covered by solicitor-client confidentiality. The books are notable for their wit and humour, and their depiction of the darker side of human nature ? characteristics that are sometimes combined in the same person, be it a lawyer, a witness on the stand, or an Irish ballad singer who doubles as a guerrilla fighter in the Troubles in war-torn Belfast. In addition to their memorable characters, the books have been credited with a strong sense of place and culture, meticulous research, crisp and authentic dialogue, and intriguing plots. The novels are set in Nova Scotia, Ireland, England, Italy, New York, and Germany. The series begins with Sign of the Cross (2006) and continues to the most recent installment, Postmark Berlin (2020).

Anne Emery is a lawyer and the author of the Collins-Burke mystery series, set in Halifax, Cape Breton, Ireland, London, and New York. She has won two Arthur Ellis Awards, an Independent Publisher Book Awards silver medal, and the Dartmouth Book Award for Fiction.
Loading...
or support indie stores by buying on