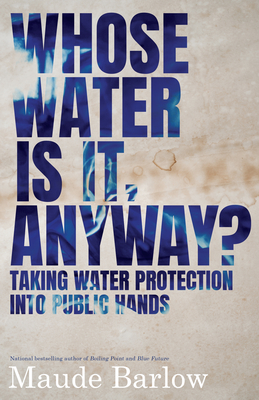 Whose Water Is It, Anyway?

"Maude Barlow is one of our planet's greatest water defenders." -- Naomi Klein, bestselling author of This Changes Everything and The Shock Doctrine "This book is a blueprint for communities around the world to take back that responsibility and maintain water as a human right." -- David Suzuki "This is a must-read." -- Jane Fonda A call to action from former Senior Advisor on Water to the U.N., honorary chairperson of the Council of Canadians, chair of Washing-based Food and Water Watch, and councillor with the Hamburg-based World Future Council The Blue Communities Project is dedicated to three primary things: that access to clean, drinkable water is a basic human right; that municipal and community water will be held in public hands; and that single-use plastic water bottles will not be available in public spaces. With its simple, straightforward approach, the movement has been growing around the world for a decade. Today, Paris, Berlin, Bern, and Montreal are just a few of the cities that have made themselves Blue Communities. In Whose Water Is It, Anyway?, renowned water justice activist Maude Barlow recounts her own education in water issues as she and her fellow grassroots water warriors woke up to the immense pressures facing water in a warming world. Concluding with a step-by-step guide to making your own community blue, Maude Barlow's latest book is a heartening example of how ordinary people can effect enormous change.

Maude Barlow is the international bestselling author of 19 books, including the bestselling Blue Water trilogy. She is the honorary chair of the Council of Canadians and of the Washington-based Food and Water Watch. She is on the executive committee of the Global Alliance for the Rights of Nature and a councillor with the World Future Council. In 2008-09, she served as senior advisor on water to the 63rd president of the UN General Assembly and was a leader in the campaign to have water recognized as a human right by the UN. In 2005, she won the prestigious Right Livelihood Award, the "alternative Nobel." She lives in Ottawa, Ontario.
Loading...
or support indie stores by buying on