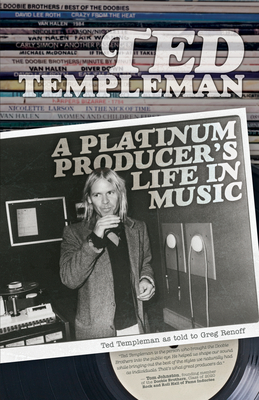 A Platinum Producer's Life in Music

Crafting smash hits with Van Halen, The Doobie Brothers, Nicolette Larson, and Van Morrison, legendary music producer Ted Templeman changed the course of rock history This autobiography (as told to Greg Renoff) recounts Templeman's remarkable life from child jazz phenom in Santa Cruz, California, in the 1950s to Grammy-winning music executive during the '70s and '80s. Along the way, Ted details his late '60s stint as an unlikely star with the sunshine pop outfit Harpers Bizarre and his grind-it-out days as a Warner Bros. tape listener, including the life-altering moment that launched his career as a producer: his discovery of the Doobie Brothers. Ted Templeman: A Platinum Producer's Life in Music takes us into the studio sessions of No. 1 hits like "Black Water" by the Doobie Brothers and "Jump" by Van Halen, as Ted recounts memories and the behind-the-scene dramas that engulfed both massively successful acts. Throughout, Ted also reveals the inner workings of his professional and personal relationships with some of the most talented and successful recording artists in history, including Steven Tyler and Joe Perry of Aerosmith, Eric Clapton, Lowell George, Sammy Hagar, Linda Ronstadt, David Lee Roth, and Carly Simon.

Ted Templeman is an award-winning music producer who discovered Van Halen and The Doobie Brothers. Greg Renoff was born in the Bronx, grew up in New Jersey, and now lives in Tulsa, Oklahoma. He is the author of Van Halen Rising: How a Southern California Backyard Party Band Saved Heavy Metal. His writing has appeared in Guitar World, LA Weekly, and Vulture, and he and his work have been profiled in Salon, Maxim, and the Boston Herald.
Loading...
or support indie stores by buying on