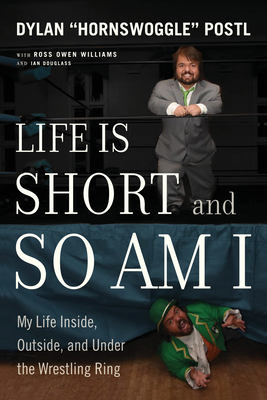 Life Is Short and So Am I

My Life Inside, Outside, and Under the Wrestling Ring

Heart, determination, and triumph This is the story of a boy who fell in love with wrestling before he was able to walk. Born with achondroplasia, a condition that causes disproportionate dwarfism, Dylan Postl had endured multiple surgeries by the age of 12. And yet, he held on to the dream that he would one day become a professional wrestler. Ignoring the naysayers and against doctors' recommendations, Postl began training in his teens, and he soon began appearing on local independent shows. Before he turned 20, he was signed by WWE to play the role of Irish grappler Finlay's feisty sidekick, Hornswoggle, and remained a fixture in the company for a full decade. While most of Postl's adult life has been spent in the wild world of the wrestling industry, his is more than a story of a little person's journey through a world of giants; it's a memoir of elation and anguish, triumph and disappointment, and of how an endlessly positive outlook combined with the unwavering support of family and friends helped a long shot become a success in his industry and a loving, responsible father.

Dylan Postl is a promoter and wrestler who spent a decade working for WWE. He currently wrestles for a number of independent promotions worldwide and runs the Wisconsin-based company All-Star Championship Wrestling. He lives in Oshkosh, Wisconsin. Ross Owen Williams is a business consultant, actor, and writer whose work includes multi-award-winning feature film Winter Ridge and books The Hardcore Truth: The Bob Holly Story and Self Help: Life Lessons from the Bizarre Wrestling Career of Al Snow. Ross lives in Somerset, England
Loading...
or
Not Currently Available for Direct Purchase