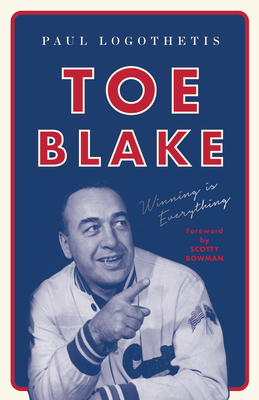 The first ever biography of Toe Blake -- Hockey Hall of Famer and eleven-time Stanley Cup winner "Holy Dirty Dora " Hector "Toe" Blake would bark while pacing behind the Montreal Canadiens bench, hands thrust into his pockets, jawing at chewing gum before intentionally banging his forehead into the glass that separates players and fans. No lead was safe or sufficient for the lifelong hockey man at the helm of the greatest dynasty in NHL history. As a player, Toe won a Stanley Cup with the Montreal Maroons before captaining a stumbling Canadiens organization to glory and a pair of Cups. As the Habs coach, Toe cemented the team's status as lords of the league with eight more. Born into a family of 11, Blake emerged from the poverty of the Depression and a youth spent working the mines of Sudbury's Nickel Belt to find junior hockey success and an unlikely shot at the NHL. While a fiery temper and penchant for stick-swinging nearly railroaded Toe's promise, the Canadiens recognized his talent and leadership, and he went on to spend more than 50 years with the organization. History remembers Toe being hoisted onto the shoulders of his beloved players, waving his signature fedora and sipping from the Cup, but behind the success was a man driven by fear and an obsessive desire for victory. Despite personal tragedy, Toe always put winning first, and as a result, there are few coaches in any sport who have enjoyed Blake's success and even fewer who endured the toll that came with it.

Paul Logothetis is a former Associated Press sports writer who contributes to The Guardian and Deutsche Press-Agentur. He spent over a decade reporting from the Olympics, F1, World Cup and Champions League finals while working as a correspondent in London and Madrid. He now lives in his hometown of Montreal.
Loading...
or support indie stores by buying on