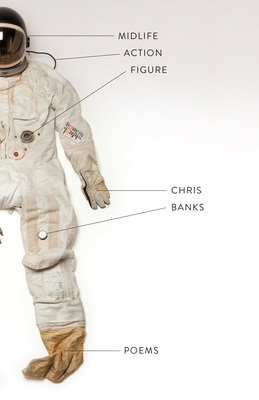 Banks's stunning new collection, exploring bold frontiers "Midlife Action Figure delivers surprise, delight, and sense." - Quill & Quire, starred review "Poetry is an act of mischief," Theodore Roethke famously once said, and Chris Banks takes this as his credo in Midlife Action Figure. His subject matter ranges from the familiar to the surreal, taking readers through poems that are both wondrous and strange, heartfelt and humorous, controlled and impatient. Whether calling a tree "an anthology of leaves" or describing time as "a Fisher-Price View-Master of 'first kisses' and 'no return' policies," Banks approaches writing as if anything might make for alarming, strange, and dizzying verse. Banks knits together wit with wildly inventive imagery as he follows his poems outside convention where they play with stolen matches. Capable of both deep introspection and the quick turn of phrase, he places his tongue firmly in his cheek as he looks for a measure of human wonder in this intermission between TED Talks and the apocalypse. Midlife Action Figure is a tour de force for anyone looking for that rare book that is as exciting as it is provocative, showcasing both pathos and humor, while it explores what it means to be alive in the early 21st century.

Chris Banks is a Canadian poet and author of four previous collections of poems, most recently The Cloud Versus Grand Unification Theory (ECW Press 2017). His poetry has appeared in The New Quarterly, Arc Magazine, The Antigonish Review, Event, The Malahat Review, and Prism International, among other publications. He lives and writes in Waterloo, Ontario.
Loading...
or
Not Currently Available for Direct Purchase