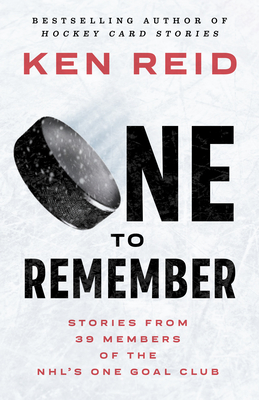 Stories from 39 Members of the Nhl's One Goal Club

From the national bestselling author of One Night Only come 39 new stories about what a big-league goal can mean to an NHLer Including interviews with Billy Smith, Chris Mason, Damian Rhodes, Christian Thomas, and Slap Shot's Dave Hanson. This follow-up to Reid's national bestseller One Night Only: Conversations with the NHL's One-Game Wonders unearths the blood, sweat, tears, and laughs of the journey to and from a single big-league goal. If you've ever picked up a hockey stick, chances are you've dreamed of scoring in the National Hockey League. Ken Reid interviews and profiles 39 men who did just that: they bulged the twine in the best hockey league in the world ... but only once. From minor league call-ups to season-long mainstays and even a Hall of Famer, One to Remember answers all the questions ... What did that one tally mean? Was it enough to satisfy a lifelong ambition, or was it just the smallest taste of success? Is the achievement still cherished years later? Or is it bittersweet, a distant reminder of what could have been?

Ken Reid is the co-anchor of the weeknight prime time edition of Sportsnet Central on Sportsnet. He has covered the Olympics, the Super Bowl, multiple Grey Cups, and has appeared on Hockey Night in Canada. He lives in Toronto with his wife and two sons.
Loading...
or
Not Currently Available for Direct Purchase