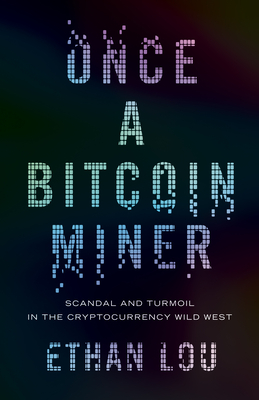 Once a Bitcoin Miner

Scandal and Turmoil in the Cryptocurrency Wild West

"Lou himself is a rare commodity in that he understands cryptocurrency and knows how to write about it ... This book stands out as a rare example of a readable snapshot of a world we all need to get more informed about." -- The Times

Ethan Lou goes on an epic quest through the proverbial cryptocurrency Wild West, through riches, absurdity, wonder, and woe. From investing in Bitcoin in university to his time writing for Reuters, and then mining the digital asset ? Lou meets a co-founder of Ethereum and Gerald Cotten of QuadrigaCX (before he was reported dead), and hangs out in North Korea with Virgil Griffith, the man later arrested for allegedly teaching blockchain to the totalitarian state.

Coming of age in the 2008 financial crisis, Lou's generation has a natural affinity with this rebel internet money, this so-called millennial gold, created in the wake of that economic storm. At once an immersive narrative of adventure and fortune, Once a Bitcoin Miner is also a work of journalistic rigor. Lou examines this domain through the lens of the human condition, delving deep into the lives of the fast-talkers, the exiles, the ambitious, and the daring, forging their paths in a new world harsh and unpredictable.


Praise For Once a Bitcoin Miner: Scandal and Turmoil in the Cryptocurrency Wild West…

Praise for Once a Bitcoin Miner

"Lou himself is a rare commodity in that he understands cryptocurrency and knows how to write about it.... This book stands out as a rare example of a readable snapshot of a world we all need to get more informed about." — the Times

"Once a Bitcoin Miner offers a first-person account on one of the most fascinating periods in tech and finance.... It's a highly entertaining read." ― Camila Russo, author of The Infinite Machine and founder of the Defiant

"Love how [Lou] places this gold rush in context — bitcoins might be new, but the story is as old as the hills." — Claire Cameron, author of The Last Neanderthal and The Bear

"Roller-coaster ride.... Readers interested in an in-the-trenches view of the Bitcoin world will appreciate Lou's willingness to tell all." — Publishers Weekly

Praise for Ethan Lou's other writing

"Lou's accessible writing about a heavy topic, combined with his fascinating mind and understated humour, leaves the reader wanting more." — Quill and Quire

"Little details and personal touches draw the reader in.... Yet underneath the colour and detail are sharp analyses.... Lou's weaving of analyses with personal anecdotes and introspective observation reads effortlessly." — Asian Review of Books

Ethan Lou's Field Notes from a Pandemic was named among the CBC's best nonfiction of 2020. Lou has written in publications such as the Guardian and the Washington Post. He is a former Reuters reporter and has served as a visiting journalist at the University of British Columbia. Lou first bought Bitcoin in 2013. He lives in Toronto.
Loading...
or support indie stores by buying on