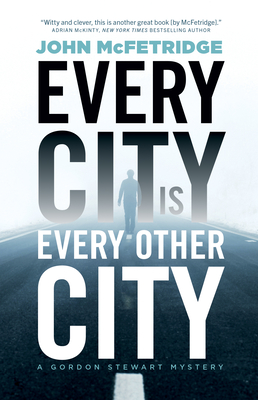 Every City Is Every Other City

Behind the scenes, nothing is what it seems.

Gord Stewart, 40 years old, single, moved back into his sub-urban childhood home to care for his widowed father. But his father no longer needs care and Gord is stuck in limbo. He's been working in the movie business as a location scout for years, and when there isn't much filming, as a private eye for a security company run by ex-cops, OBC. When a fellow crew member asks him to find her missing uncle, Gord reluctantly takes the job. The police say the uncle walked into some dense woods in Northern Ontario and shot himself, but the man's wife thinks he's still alive.

With the help of his movie business and OBC connections, Gord finds a little evidence that the uncle may be alive. Now Gord has two problems: what to do when he finds a man who doesn't want to be found, and admitting that he's getting invested in this job. For the first time in his life, Gord Stewart is going to have to leave the sidelines and get into the game. Even if it might get him killed.

John McFetridge is the author of two critically acclaimed crime novel series: the Toronto Series and the Eddie Dougherty Series. He has written for the TV shows The Bridge and Real Detective. He lives in St. Catharines, Ontario.
Loading...
or
Not Currently Available for Direct Purchase