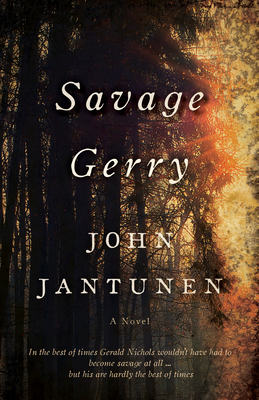 "John Jantunen consistently zigs where other narratives would zag, creating a story that is far stranger and disturbing." -- Shelf Awareness

A thrilling apocalyptic tale that rushes from the inside of a prison to a world that feels even more dangerous. The End couldn't have come at a better time for Gerald Nichols.

Dubbed "Savage Gerry" by the media, Gerald Nichols became a folk hero after he shot the men who'd killed his wife and then fled into the northern wilds with his thirteen-year-old son, Evers. Five years after his capture, he's serving three consecutive life sentences when the power mysteriously goes out at the prison. The guards flee, leaving the inmates to die, but Gerald's given a last-minute reprieve by a jailbreak. Released into a mad world populated by murderous bands of biker gangs preying on scattered settlements of survivors, his only hope of ever reuniting with his son is to do what he swore he never would: become "Savage Gerry" all over again.

Set in a future all-too-near our own against a backdrop of Northern Ontario's natural splendor, Savage Gerry is a refreshingly Canadian spin on the Mad Max films.

John Jantunen is also the author of Cipher, No Quarter, and A Desolate Splendor. He has lived in almost every region of Canada and currently lives in Kingston, Ontario.
Loading...
or
Not Currently Available for Direct Purchase