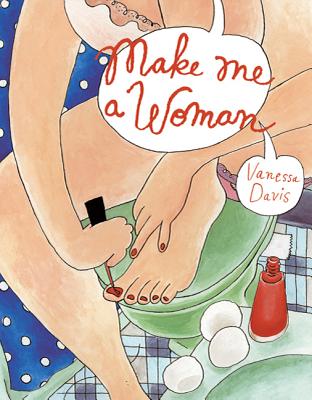 Make Me a Woman

Make Me a Woman offers charming vignettes about being young, Jewish, and single

It's easy to understand why Vanessa Davis has taken the comics industry by storm and is poised to do the same with the world at large—her comics are pure chutzpah, gorgeously illustrated in watercolors. No story is too painful to tell—like how much she enjoyed fat camp. Nor too off-limits—like her critique of R. Crumb. Nor too personal—like her stories of growing up Jewish in Florida. Using her sweet but biting wit, Davis effortlessly carves out a wholly original and refreshing niche in two well-worn territories: autobio comics and the Jewish identity.

Davis draws strips from her daily diary, centering on her youth, mother, relationships with men, and eventually her longtime boyfriend. Her intimacy, self-deprecation, and candor have deservedly earned her many accolades and awards. Her deft comedic touch, lush color, and immediacy will set Davis apart not only as one of the premier cartoonists, but as one of the leading humorists for her generation, too.


Praise For Make Me a Woman…

“What distinguishes Davis's take is a reflective hunger formeaning and connection in the very mundane. ” —Bust on Vanessa Davis

Vanessa Davis was born in West Palm Beach, Florida, and lives in Santa Rosa, California. She is the author of Spaniel Rage. Her comics have appeared in Vice, The New York Times, and Tablet.
or
Not Currently Available for Direct Purchase