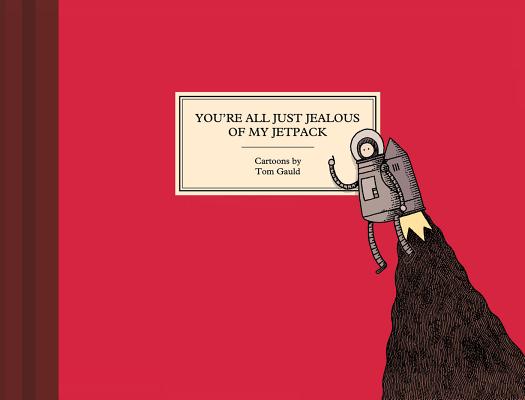 You're All Just Jealous of My Jetpack

"Precise and wryly hilarious...Gauld's both a literature nerd and a science-fiction nerd whose deadpan mashups belong on the same shelf as R. Sikoryak, Michael Kupperman, and Kate Beaton."—NPR, Best Books of 2013
A new collection from the Guardian and New York Times Magazine cartoonist
The New York Times Magazine cartoonist Tom Gauld follows up his widely praised graphic novel Goliath with You're All Just Jealous of My Jetpack, a collection of cartoons made for The Guardian. Over the past eight years, Gauld has produced a weekly cartoon for the Saturday Review section of Britain's best-regarded newspaper. Only a handful of comics from this huge and hilarious body of work have ever been printed in North America—and these have been available exclusively within the pages of the prestigious Believer magazine.
You're All Just Jealous of My Jetpack distills perfectly Gauld's dark humor, impeccable timing, and distinctive style. Arrests by the fiction police and imaginary towns designed by Tom Waits intermingle hilariously with piercing observations about human behavior and whimsical imaginings of the future. Again and again, Gauld reaffirms his position as a first-rank cartoonist, creating work infused with a deep understanding of both literary and cartoon history.


Praise For You're All Just Jealous of My Jetpack: Cartoons…

“Each single-page piece is a clever, funny, slightly bonkers riff on a literary theme.” —The Times UK

“A collective narrative that explores contemporary society in depth, forcing us to scrutinise ourselves and the realities we take for granted. More importantly they're just seriously funny.” —It's Nice That

“Tom Gauld is pretty brilliant. You're All Just Jealous of My Jetpack.. is ... dark and funny. Some of the best comics in the collection are the bookish ones, taking chummy digs at everyone from Martin Amis to the Brontës to "proper literature.” —Flavorwire

“These strips mix high culture with low, creating a rare alchemy that is pitch-perfect and full of fun. Gauld's comic strips are smart, silly and hilarious.” —Cult Montreal

“That Gauld is able to get so much of that across with so little is like the most disarming, confounding magic trick.” —A.V. Club

“[You're All Just Jealous of My Jetpack] consists of single panel cartoon that explore the passage of time, absurdism, and most of the 7 Deadly Sins, all presented with a sense of graceful whimsy that makes his work such a delight to read.” —Boing Boing

“His economical art...is married to dry, incisive humor, making each strip a carefully composed marvel…[Gauld is] a cartoonist on par with Charles Addams and Gary Larson.” —Publishers Weekly

Tom Gauld lives in London. His comics frequently appear in The Guardian, The New York Times, and The Believer. He has designed a number of book covers.