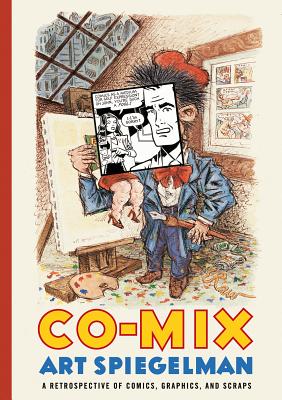 A Retrospective of Comics, Graphics, and Scraps

In an art career that now spans six decades, Art Spiegelman has been a groundbreaking and influential figure with a global impact. His Pulitzer Prize-winning holocaust memoir Maus established the graphic novel as a legitimate form and inspired countless cartoonists while his shorter works have enormously expanded the expressive range of comics.
Co-Mix: A Retrospective of Comics, Graphics, and Scraps is a comprehensive career overview of the output of this legendary cartoonist, showing for the first time the full range of a half-century of relentless experimentation. Starting from Spiegelman's earliest self-published comics and lavishly reproducing graphics from a host of publications both obscure and famous, Co-Mix provides a guided tour of an artist who has continually reinvented not just comics but also made a mark in book and magazine design, bubble gum cards, lithography, modern dance, and most recently stained glass. By showing all facets of Spiegelman's career, the book demonstrates how he has persistently cross-pollinated the worlds of comics, commercial design, and fine arts. Essays by acclaimed film critic J. Hoberman and MoMA curator and Dean of the Yale University School of Art Robert Storr bookend Co-Mix, offering eloquent meditations on an artist whose work has been genre-defining.


Praise For Co-Mix: A Retrospective of Comics, Graphics, and Scraps…

“A classic of a different kind – by which I mean that I am declaring it to be a classic right here and now – is Co-Mix, a "retrospective" of comics, graphics and "scraps" by Art Spiegelman, the Pulitzer prize-winning author of Maus. Among the collectors' items gathered within are full-page reproductions of covers for Robert Crumb's Short Order Comix; a full-size insert of the long out of print Raw comic Two-Fisted Painters; and Spiegelman's peerlessly brilliant New Yorker strips about Maurice Sendak and – my favourite – Charles Schulz. The ultimate swank present for any completist Spiegelman fan.” —Guardian Graphic Books of the Year Review

“Exploring the breadth of his work, [Co-Mix] shows that, perhaps more than any other single artist, Spiegelman has energized the range of emotional possibility in comics.” —San Francisco Weekly

“What's refreshing about Co-Mix is the level to which it demonstrates Art's diversity. While many retrospective publications like to show off just the one creative direction, this revels in the frenetic intellectual talent that produced the graphic novel's finest example.” —It's Nice That

Born in Stockholm in 1948, Art Spiegelman was the first comics artist to win the Pulitzer Prize, which he received for his groundbreaking bestseller Maus. He coedited Raw, and his comics have appeared in The New Yorker, The New York Times, Playboy, and Harper’s. He has been named one of the 100 Most Influential People by Time, elected to the Art Director Club’s Hall of Fame, made a Chevalier de l’Ordre des Arts et des Lettres in 2005 (promoted to Officier in 2012), and played himself on The Simpsons. In 2011, Spiegelman was elected president of the Angoulême International Comics Festival and was awarded the Grand Prix of the Festival. He lives in New York City.
Loading...
or
Not Currently Available for Direct Purchase