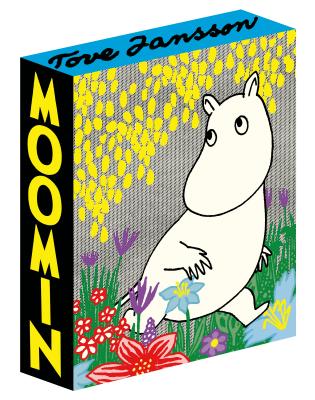 A celebration of Tove Jansson's legacy, one hundred years after her birth

Tove Jansson's Moomin stories made her one of the most beloved Scandinavian authors of the twentieth century. Jansson's whimsical tales of Moominvalley resonate with children for their lighthearted spirit, and with adults for their incisive commentary on the banality of everyday life. The year 2014 marks the centenary of her birth, and Jansson is being honored with events in Japan, Scandinavia, England, Germany, Russia, Australia, Italy, Spain, and France. Drawn & Quarterly is joining the festivities by releasing Moomin Deluxe: Volume One, a slipcased hardcover collection of the complete Tove Jansson-penned Moomin comic strip, replete with all of her most popular storylines and original pencil sketches.
It has been more than sixty years since the Moomin comic strip debuted in the London Evening News. By the end of its run in 1975, Moomin was syndicated in more than forty newspapers around the world and hailed for its light-handed, charming stories. The comics were revived in 2005 by Drawn & Quarterly and published to widespread acclaim, sparking a new generation of devoted Moomin fans with international editions around the world. Moomin Deluxe: Volume One celebrates the classic comics the world adores, and will feature an essay about Tove's work on the Moomin strip.


Praise For Moomin Deluxe: Volume One…

“This single volume edition . . . comes with several full-page, never-seen-before character studies and sketches, runs to 400 pages, and weighs in at about 2kg . . . If you love Sniff, Snufkin and the rest, you'll find it irresistible.” —Guardian Best Graphic Novels of 2014

“Sixty years after their original serialization--and to celebrate Jansson's centenary--the fanciful comic strip frolics of the hippo-like Moomins are collected together in one volume, handsome and big enough to hug.” —Globe & Mail Best Books of 2014

“With a sincere childlike nature and a stoic acceptance of misadventure . . . Moomin and company--Moominmamma, Snufkin, Stinky and Snork Maiden, to name a few--emerge from each story full of tolerance and quiet humor.” —The New York Times

“As a strip, there is nothing really all that much like Moomin . . . You could read entire anthologies of comic strips that do not contain the sadness and truth that Jansson gets into three panels there. That is ultimately Jansson's real gift: stuffing so, so much into the tiniest of spaces. I can only imagine how world-expanding that would seem to a child. As an adult, it's an overstuffed reminder of how horrible it is to crave simplicity.” —National Post

“Tove Jansson . . . created a quirky, original comic strip masterpiece . . . Moomins are the vehicles through which Jansson explores everything that's laughable, charming, laudable and suspect about being human.” —Myla Goldberg, NPR on the Moomin Series

Tove Jansson (1914–2001) was born in Helsinki and spent much of her life in Finland. She is the author of the Moomin books, including Comet in Moominland and Finn Family Moomintroll. Born into an artistic family—her father was a sculptor and her mother was a graphic designer and illustrator—Jansson studied at the University College of Arts, Crafts and Design in Stockholm, the Finnish Academy of Fine Arts, and L’École des Beaux-Arts in Paris. In addition to her Moomin books, she also wrote several novels, drew comic strips and worked as a painter and illustrator. In 1966, she was awarded the Hans Christian Andersen Medal for her body of work. Jansson had a studio in Helsinki but spent most of her time at her home on a small island called Klovharu.
Loading...
or support indie stores by buying on
(This book is on backorder)