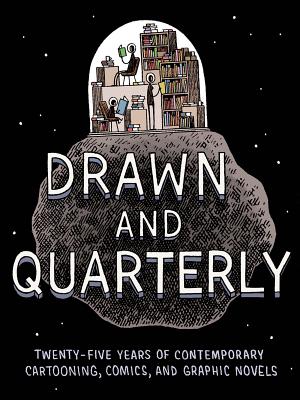 Drawn & Quarterly: Twenty-Five Years of Contemporary Cartooning, Comics, and Graphic Novels is an eight hundred-page thank-you letter to the cartoonists whose steadfast belief in a Canadian micro-publisher never wavered. In 1989, a prescient Chris Oliveros created D+Q with a simple mandate to publish the worlds best cartoonists. Thanks to his taste-making visual acumen and the support of over fifty cartoonists from the past two decades, D+Q has grown from an annual stapled anthology into one of the world's leading graphic novel publishers.
With hundreds of pages of comics by Drawn & Quarterly cartoonists, D+Q: 25 features new work by Kate Beaton, Chester Brown, Michael DeForge, Tom Gauld, Miriam Katin, Rutu Modan, James Sturm, Jillian Tamaki, Yoshihiro Tatsumi alongside rare and never-before-seen work from Guy Delisle, Debbie Drechsler, Julie Doucet, John Porcellino, Art Spiegelman, and Adrian Tomine, and a cover by Tom Gauld. Editor Tom Devlin digs into the company archives for rare photographs, correspondence, and comics; assembles biographies, personal reminiscences, and interviews with key D+Q staff; and curates essays by Margaret Atwood, Sheila Heti, Jonathan Lethem, Deb Olin Unferth, Heather O'Neill, Lemony Snicket, Chris Ware, and noted comics scholars.
D+Q: 25 is the rare chance to witness a literary movement in progress; how a group of dedicated artists and their publisher changed the future of a century-old medium.

“...an exuberantly entertaining anthology of short comics (many of them new) by almost all of the artists who have worked with the company over the years, from Kate Beaton's sly, brash gag strips about history and literature to Geneviève Castrée's tender sequence of self-portraits with blankets under which she's rested.” —New York Times

“...a jaw-dropping 800-page, full-colour anthology that serves as both company history and testament to everything accomplished since its first title.” —The Globe & Mail

“This giant tome collects [an array] of creative riches... rounded out by essays from established prose authors such as Jonathan Lethem, Margaret Atwood, and Lemony Snicket, celebrating the company and its groundbreaking talent. It's a history of one great company, but this volume also works as an essential guide to the development of alternative comics in all their glory.” —Publishers Weekly Starred Review

“Gorgeous, hilarious and uncompromisingly integral, this printed history certainly wasn't necessary to prove the magic D&Q has accomplished, but you can't help at marvel at the breadth of it when presented with such meticulous heart and passion.” —Paste Magazine