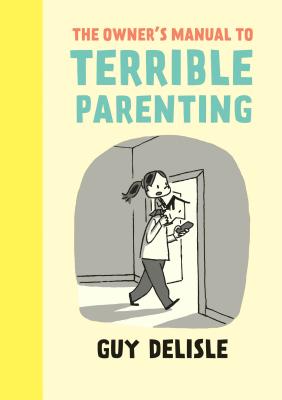 Guy Delisle, the author of Jerusalem: Chronicles from the Holy City and A User's Guide to Neglectful Parenting, shares hilarious new comic strips that pay tribute to all the ways parents can drive their kids crazy, and vice versa, in The Owner's Manual to Terrible Parenting.
Slipping grammar lessons into bedtime stories, being challenged by difficult toys, and pretending to forget you even have a son: it's all in a day's work for Delisle. In The Owner's Manual, Delisle doesn't hesitate to make a slightly bumbling, fictionalized version of himself the butt of the joke, though his children often contribute zingy repartee and laugh-out-loud insight in the stories on display here.
The Owner's Manual is the perfect antidote to frustrating car rides filled with "Are we there yet?" and epic battles over homework. Delisle's effortless pacing and witty punch lines reign supreme here, making each vignette zip along to its conclusion.

Born in Québec City, Canada, in 1966, Guy Delisle now lives in the south of France with his wife and two children. He spent ten years working in animation, which allowed him to learn about movement and drawing. He is best known for his travelogues about life in faraway countries: Burma Chronicles, Jerusalem: Chronicles from the Holy City, Pyongyang, and Shenzhen. In 2012, Delisle was awarded the Prize for Best Album for the French edition of Jerusalem at the Angoulême International Comics Festival.


Praise For The Owner's Manual to Terrible Parenting…

“A funny and truthful book about being a parent.” —Boing Boing on A User's Guide to Neglectful Parenting

“Guy Delisle is the real thing: a skilled and wryly funny Quebecois cartoonist . . . The brevity of each vignette [in A User's Guide] highlights Delisle's acute sense of timing.” —NPR on A User's Guide to Neglectful Parenting