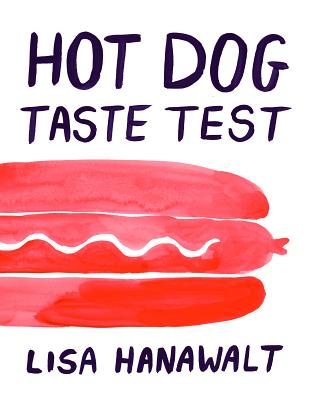 "Frankly speaking, you should get off your buns and go buy this book — you'll relish it."—Amy Sedaris

"Hanawalt’s art balances the somber and the playful... [and her] hybrids make use of the estrangement between human and animal."—Chris Randle, The Guardian

Hot Dog Taste Test serves up Lisa Hanawalt's devastatingly funny comics, saliva-stimulating art, and deliciously screwball lists as she skewers the pomposities of foodie subculture. From the James Beard Award-winning cartoonist and production designer/producer of Bojack Horseman, Hot Dog Taste Test dishes out five-star laughs as Hanawalt keenly muses on pop culture, relationships, and the animal in all of us.

“…a riot of color, spilling with imagination, and simply a lot of fun.”—Estelle Tang, Elle

"Hanawalt explores her anxieties and obsessions with candor and imaginative humor, pointing out the fantastical elements of everyday life, and injecting some magic (or, more likely, a weird pervy energy) into the mundane.”—Monica Heisey, Broadly

"Lisa Hanawalt has an amazing ability to make the mundane disturbing and the strange seem normal. Also, her baking tips are solid."—David Chang, Founder of Momofuku Restaurants & Lucky Peach Magazine

"We are so lucky to get these peeks into Lisa Hanawalt's brain and stomach. The amount of joy in her gleefully pervy illustrations makes me happier to be alive. I aspire to the level of enthusiasm she seems to derive from examining how stupid it is to be a person!"—Tavi Gevinson, Editor of Rookie

"Lisa Hanawalt is the Matisse of the buffet line, the O'Keefe of the fish ball, and the Vermeer of the pigeon with a hot dog in its beak. Also: horses."—Jonathan Gold, food critic and Pulitzer Prize Winner

"Lisa Hanawalt is my favourite funny artist. Her special brand of humor hits me directly where I live, even though I never told her where I live."—Jaime Hernandez, author of Love and Rockets

From Other People in 2008, establishing her comic-making style of funny illustrated lists and anthropomorphized animals. Her first collection with D+Q, My Dirty Dumb Eyes, was published in 2013 and met with widespread critical acclaim.

Lisa Hanawalt draws illustrations and funnies for places like The New York Times, Hazlitt, McSweeneys, Chronicle Books, and Vanity Fair and she writes and draws a quarterly food column for Lucky Peach, for which she won a James Beard Award in 2014. She currently lives in Los Angeles, CA, and is the character designer for and co-producer of the Netflix original series, Bojack Horseman.