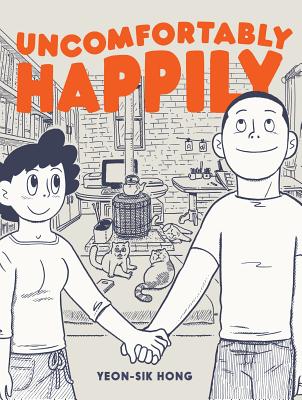 "Uncomfortably Happily by Yeon-sik Hong tells the story of its author’s decision to leave 21st-century Seoul and move with his wife to a small house on top of a mountain... Charming and perhaps unexpectedly complex."—Guardian, Best Graphic Novels of 2017

When the gentler pace and stillness of the countryside replace the roar of the city, but your editor keeps calling

With gorgeously detailed yet minimal art, cartoonist Yeon-Sik Hong explores his move with his wife to a small house atop a rural mountain, replacing the high-rent hubbub of Seoul with the quiet murmur of the country. With their dog, cats, and chickens by their side, the simple life and isolation they so desperately craved proves to present new anxieties. Hong paints a beautiful portrait of the Korean countryside, changing seasons, and the universal relationships humans have with each other as well as nature, both of which are sometimes frustrating but always rewarding.

"Uncomfortably Happily is a candid, engrossing tale of two comic artists looking for comfort in solitude and minimalist living, even as the twin shadows of poverty and stress loom." —The Atlantic

"Uncomfortably Happily by Yeon-sik Hong tells the story of its author’s decision to leave 21st-century Seoul and move with his wife to a small house on top of a mountain... Charming and perhaps unexpectedly complex."—Guardian, Best Graphic Novels of 2017

"[An] extraordinary comic-book memoir... Uncomfortably Happily bursts with irrational exuberance from every panel."—Slate

"Uncomfortably Happily is clever, charming, and worth a look if you are interested in a droll family story, graphic novels, or an introduction to a wide range of Korean modern culture." —Los Angeles Review of Books

"[Uncomfortably Happily is] brilliantly illustrated in black and white, which veers from minimal slices of everyday life to more intricate, elaborate flights of fancy to depict the husband’s angst and existential self-pity. But for the most part, the book is full of levity... there is a simplicity and peacefulness in watching two people just try to make it work."—GQ

"The mix of pathos and buoyant humor — as well as charming and three-dimensional characterization — keep you engrossed. Plus, the artwork is fantastic, mixing cartoony, almost Lynda Barry–ish figure work with stunningly evocative and impressionistic landscapes."—Vulture

"Hong’s minimalist detail speaks volumes as he enjoys snowy walks with his wife and languid swims in a nearby pond, wrestling with the anxieties of marriage, new parenthood, and imposter syndrome."
—Los Angeles Review of Books

“This engrossing story of an artist couple who leave the noise and smog of the city behind for mountainside solitude is by turns delicate and raw, with artwork that ranges from the gently pastoral to the surreal and harrowing. Beautifully done.”—John Porcellino

“At first glance Uncomfortably Happy may look to be merely a sweet little story about youthful struggle, but page by page, it unfolds into a much more complex work. A book both dark and light, intimate, touching yet also exceedingly charming. All the stuff of real life.”—Seth, author of Palookaville

Yeon-Sik Hong was born in 1971. He began apprenticing in a manga studio in 1990, and wrote his first short stories (in comics form) in 1992, but commercial projects kept him from his personal work for another decade.

In 2005, Hong and his partner tried to move to the countryside. Two years later, Hong began work on a graphic novel inspired by these experiences. Uncomfortably, Happily was published in two volumes in 2012: it quickly became a critical success, going back for a second printing and receiving the Manhwa Today Award.

While they’d still like to move back to the countryside someday, for now Yeon-Sik Hong and his partner are living on the outskirts of Seoul.